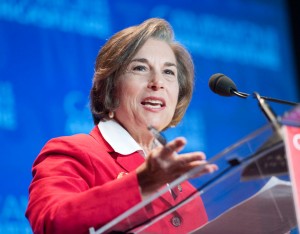 Representative Jan Schakowsky spoke at the Annual Ultimate Women’s Power Lunch and had plenty to say.

This is an election year – or as some say, an off-year election, meaning that there is no Presidential race, and many of the pundits have concluded that turnout, especially of Democrats, will be down, so the Senate is likely to go Republican and Nancy Pelosi will not be the Speaker of the House. Need I tell you – elections really matter, especially for women.

So the mostly male pundits are pontificating with some gloomy projections – But I’d rather ask you, the ultimate power women of Chicagoland a simple yes or no question: Do you think we inevitably lose in November?

Absolutely not. Because midterm elections rely so heavily on turnout (that is, who actually votes) we have considerable control over the outcome. I tell my election volunteers that I have a secret strategy for winning and not to give it away. First, identify the people who, if they get to the polls will vote my way. Second, make sure they are registered to vote and third, get them to vote. That’s it. Not rocket science. We can win the 17 seats needed to take back the House – if Democrats vote.

Second. We already proved we can do it. In Virginia, in an off-year election, Democrat Terry McAuliffe and every other Democratic Statewide candidate won in 2013. The overall turnout was in fact down, but the DEMOCRATIC turnout was the same percentage of the vote as in 2012.

2010 was a good year for the Tea Party and a bad year for Democrats. We lost 63 seats in the House of Representatives, and John Boehner became Speaker. Obamacare is often blamed for that outcome.

But if you look at the turnout you see another story, a more important and instructive story. There are approximately 53 million unmarried women in the United States – 1 out of 2 women. In 2010, nearly 40% of unmarried women were not registered to vote. If women had simply shown up, we could have maintained our majority. In 2012, unmarried women did vote, and they voted 67% for Obama and 31% for Romney – numbers that spell victory.

I don’t have to recount the ways in which the Republicans have declared ongoing war on women’s reproductive rights, including the right to birth control.

But the war and the disrespect goes beyond reproductive and sexual politics to questions like whether women at long last can get equal pay for equal work, and whether or not they can feed their families.

Still, many women think that politicians don’t really get the reality of their lives. And if they listen to the Republicans, they are exactly right.

So the House Democratic women, under the leadership of Nancy Pelosi, and in partnership with women across the country, have launched a women’s economic agenda campaign called: When Women Succeed, America Succeeds. As Nancy says, “This is not just a slogan; it is a fact.”

This agenda addresses the concerns that women share with us in scores of gatherings we are holding around the country. Many of these concerns have been documented in a new study by Maria Shriver and the Center for American Progress. The Shriver Report revealed some very sobering findings about the state of American women today.

We heard from a school bus driver who told us she regularly stops for mothers, who, with tears in their eyes, put a sick child on the bus. That mom’s choice is to lose a much needed day’s pay or even her job, or hope her child feels better during the day.

We Democratic Congresswomen are taking our When Women Succeed, American Succeeds agenda on the road, starting a bus tour in early summer. We’ll be talking about raising the minimum wage, now $7.25 nationally, $8.25 in Illinois, and a ridiculous $2.13 an hour for workers who rely on unreliable tips. We’re rallying support for equal pay, paid sick days and family leave, expanding Social Security and Medicare, and lifting up workers and unions.

Americans support this agenda, men as well as women for obvious reasons. Closing the wage gap between men and women would cut the poverty rate in half for working-women and their families and would add nearly ½ trillion to the national economy. When President Obama said in his State of the Union Address, “When women succeed, America succeeds”, the dial testing went off the charts.

Come on, say it with me, When Women Succeed, America Succeeds.

Turns out we’re not alone. Last year, I said that this is the century of the women and now there’s a new book that documents that idea, “The Athena Doctrine: How women (and the men who think like them) will rule the future.” The two male authors surveyed 64,000 people, men and women, chosen to mirror the populations of 13 diverse countries – (Brazil, Canada, Chile, China, France, Germany, India, Indonesia, Japan, Mexico, S. Korea, UK, and US.)

When the data came in, they found that across age, gender and culture, people around the world, by large majorities, feel that feminine traits correlate more strongly with making the world a better place. I challenge anyone in this room to disagree.

They said, “We believe that the essence of the modern leader is feminine. The people we surveyed challenge the incumbency of masculine structure and the ways of men in restoring trust and solving the most intractable problems we face today. More than ever before, leadership is about being expressive and empathetic.”

They found that the definition of winning is changing becoming a more inclusive construct, rather than a zero-sum game. Masculine traits like aggression and control are considered less effective than the feminine values of collaboration and sharing credit.

They even found that in 2009, Hedge Fund Research reported that funds run by women had for 9 years straight significantly outperformed those run by men. 2012 study by Credit Suisse revealed over a 6 year period, shares of large companies with women board members outperformed comparable companies with all male boards by 26%.

65% of people around the world believe that more female leadership in government would prompt a rise in trust and fairness and a decline in wars and scandal.

They concluded their book this way: “We live in a world that’s increasingly social, interdependent, and transparent. And in this world, feminine values are ascendant. Powered by cooperation, communication, nurturing, and inclusiveness, …institutions, businesses and individuals are breaking from old masculine structures and mind-sets to become more flexible, collaborative, and caring. Our data show that this change is deemed necessary, and is welcomed by strong majorities in every country we surveyed…As a result of our experiences, we contend that feminine values are the operating system of twenty-first century progress.”

Contrast this with John McCain accusing John Kerry of speaking loudly and carrying a small stick – “I would say a twig,” said McCain. Seriously? He’s talking Big stick vs twig!? And because Diane Feinstein wants to release a factual report on torture during the Bush Administration, she was accused of being “too emotional.” Boys, boys, boys.

In this election we need to help women and men, including the men in this room like Governor Quinn, our Congressional Democrats, and the others I mentioned, the men who support equality and justice for women.   They all need only two things: your time and your money.

If we don’t fully engage, the pundits will be right. They will report that, just as expected in 2014, an off-year election, the Democrats lost ground. In states all over the country, Republicans are trying to help this along with voter suppression laws, like in Michigan, Wisconsin and Texas where Mark Schauer, Mary Burke and Wendy Davis need to be Governor

You already know the downside of losing: continuing a rigged economy that makes the rich richer, the poor poorer and the middle class disappear. You live the war on women and workers. The Republicans will keep trying to repeal or roll back Obamacare, Multi-Millionaires and Billionaires will expand their control of our political system, buying influence and buying elections like we are seeing with Bruce Rauner in Illinois.

What I want you to consider is the upside of winning. We could start fixing a rigged economy that has created the greatest inequality in the industrialized world; in rebuilding a crumbling in infrastructure and our public schools, creating good jobs, raising the minimum wage, extending unemployment compensation, passing comprehensive immigration reform, improving health care, building a clean energy economy, supporting unions and pensions, guaranteeing retirement security, giving women equal pay and affordable child care, universal pre-school, passing sensible gun safety laws, passing marriage equality, expanding the right to vote, ending oppressive college debt, and reversing the role of big money in politics. The last two years of the Obama Administration could be amazing.

This is not a pipedream. We can decide to make it so. Victory is in our hands, your hands, in the hands of people who decide to get off the sidelines, patriots who believe the best of America is yet to come.

We can do it. Remember my sisters and like-minded brothers: When women succeed, America succeeds!