Senator Tammy Duckworth. She was one of the first women to fly combat missions in Iraq as a Black Hawk helicopter pilot until November 12, 2004 when her helicopter was hit by an RPG. Tammy lost both legs and part of the use of her right arm in the explosion, and was awarded the Purple Heart for her combat injuries.

During her recovery at Walter Reed, Tammy was one of the highest-ranking amputees and became an advocate for her fellow soldiers. Her leadership was recognized when she was asked to testify before Congress and recruited to run for the House of Representatives. After losing a close race, Tammy continued to serve as a Major in the National Guard and became Director of Illinois’ Department of Veterans’ Affairs. There, she implemented many first in the nation programs to address Post Traumatic Stress, improve traumatic brain injury screening and reduce homelessness among Vets.

In 2009, Tammy was tapped by President Obama to be Assistant Secretary of Veterans Affairs where she sought to improve the standard of care for Vets. She oversaw VA’s effort to end Veteran homelessness and lead initiatives for female Vets and increased accessibility and accountability with the new Office of Online Communications.

She is a graduate of the University of Hawaii and received a Masters of Arts in International Affairs from the George Washington University. She and her husband Bryan, an Army Major, live in Hoffman Estates where their home was rebuilt for wheelchair access in 2005 by her fellow Soldiers and friends. Despite her injuries, she declined a military medical retirement and continues to drill as a Lieutenant Colonel in the Illinois Army National Guard. 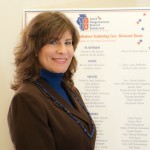 Hon. Lauren Beth Gash is an attorney (Georgetown University Law Center, ’87, where she served as  Associate Editor of the American Criminal Law Review). She served four terms in the IL House of Representatives, where she chaired the Judiciary Committee and worked with then-State Senator Barack Obama on several pieces of legislation. In 2008, Lauren was a member of the Electoral College on behalf of the President, and was elected a Delegate to the Democratic National Convention in 2012.  She previously worked in Washington, D.C., and has served on the staffs of U.S. Senators Alan Dixon and Paul Simon.

Lauren is a life-long community organizer who has served on numerous not-for-profit boards, including the League of Women Voters, PTA, and the Anti-Defamation League. She is a former volunteer attorney at Prairie State Legal Services.

Most recently, Lauren founded and is the Chair of the Tenth Congressional District Democrats (Tenth Dems), a grassroots organization dedicated to building a strong Democratic infrastructure in Chicago’s northern and northwestern suburbs. The group’s Tenth Dems University regularly hosts nationally recognized leaders, and its new office, the Community Connection, helps local residents, putting into action the Connection’s motto that “Politics should be about more than just elections — it should be about working together to build stronger communities.”

Lauren lives in Highland Park, Illinois and is married to Gregg Garmisa. They have two adult children – Sarah, 28 (manages the digital media labs at the California College of the Arts in San Francisco), and Ben, 26  (a Press Secretary to Sen. Dick Durbin in Washington, D.C.).