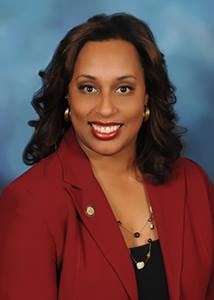 Senator Toi Hutchinson has earned a reputation as a highly effective and well-regarded public servant with a strong commitment to the residents of the 40th District.

Since joining the Senate in 2009, Hutchinson has placed a high importance on working to modernize Illinois’ antiquated tax structure, protecting women and children from violence and exploitation and supporting construction projects that create jobs while also maintaining Illinois’ position as an international transportation hub.

As Chairwoman of the Senate Revenue Committee, Hutchinson has introduced legislation to close corporate tax loopholes, which would make corporations pay their fair share and help ensure the state doesn’t balance its budget on the backs of middle-class families. Hutchinson also passed a law increasing the Earned Income Tax Credit (EITC) as well as the standard tax exemption, allowing working families to keep more of their hard-earned money.

She has passed many laws that protect women, children, seniors and people with disabilities. Hutchinson passed a law safeguarding pregnant women in the workplace from discrimination. Hutchinson also teamed with Attorney General Lisa Madigan to make Illinois the first state in the nation to pass a law mandating the testing of all rape kits within ten days of obtaining evidence. Working with the Chicago Alliance Against Sexual Exploitation, Hutchinson passed a law that allows a victim of sex trafficking to apply for relief from judgment when the victim has a prostitution conviction. Hutchinson has also worked to strengthen anti-cyberstalking laws and passed a law to increase the penalty for financially exploiting seniors and people with disabilities.

Hutchinson has been an ardent supporter of transportation development in the 40th District. She passed a law creating the Southeast Commuter Rail Transit District that will eventually construct a new Metra line connecting eleven South Suburban communities with downtown Chicago. In 2013, she passed the first public-private financing agreement in Illinois. This growing method of financing public projects is gaining popularity nationwide as costs to expand and develop transportation infrastructure continue to rise.

As a mother of three children who attended public schools, Hutchinson has placed high importance on improving public education in Illinois. Concerned about the increasing number of students, especially African-American boys, who receive severe disciplinary action that keeps them out of the classroom, Hutchinson passed a law to study the problem and work with school districts to reduce expulsions and suspensions.

Hutchinson lives with her family in Olympia Fields.