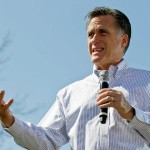 Romney’s top advisor said yesterday that Romney would “hit a reset button” for the general election and that “it’s almost like an Etch-A-Sketch. You can kind of shake it up and restart all over again.” But Romney, who repeatedly calls himself a “severe conservative,” may not be able to shake his commitment to conservative voters. Romney:

Romney’s willingness to say and stand for anything to get elected is nothing new. He has flip-flopped on issue after issue to try to win over Republican voters:

With Romney’s repeated flip-flops on almost every single issue, it’s no wonder why voters don’t trust him.

Romney’s Budget Plan Is Just Like Ryan’s: Bad For Seniors And The Middle Class

Mitt Romney’s budget plan is just like the one Congressman Paul Ryan released the Republican budget plan this week: they’re both bad for seniors and the middle class. Both Romney’s and Ryan’s budget plans turn Medicare into a voucher program, increase health care costs to seniors by
thousands of dollars, and give massive tax cuts to the wealthiest.

Romney has said he is on he same page as Ryan even “applauding” this week’s budget – so America’s seniors need to take note of what this budget means for them.
The Romney and Ryan budgets would turn Medicare into a voucher program. What does this mean for seniors and middle class families?

— Romney likes to say that his Social Security plans wouldn’t change anything for current or soon-to-be retirees. But Romney never menti

ons what would happen for everybody else. In fact, a plan like Romney’s for Social Security could actually cut benefits by $2,400 a year for workers in their forties and by $4,700 for those in their twenties.

Neither the Romney nor Ryan budget plans ask millionaires and billionaires to pay their fair share.

— While Mitt Romney and the Republicans want to end Medicare as we know it and devastate Social Security, President Obama is doing the opposite.

March 23 was the second anniversary of President Obama’s landmark health reforms, which are already helping millions of Americans save money and live healthier lives.

Medicare is now stronger for seniors, and women can now get life-saving mammograms at no extra cost. Children won’t lose their coverage just because they were born with pre-existing conditions like asthma – and American families are seeing how reform is saving lives and saving money.

Since we passed reform almost two years ago, Americans have seen its positive impact:

That’s just the beginning. As the law continues to phase in over the coming months, so will more of its benefits. New reforms will lower costs and raise the quality of care. Seniors will see their Medicare coverage continue to improve, and see the doughnut hole completely close.

And in two years, every single American, regardless of their circumstances – whether they want to change jobs, start a business or retire early, or even if they lose their job – will have access to affordable, quality health insurance. Presidents have been trying to make that happen for 70 years. President Obama got it done.