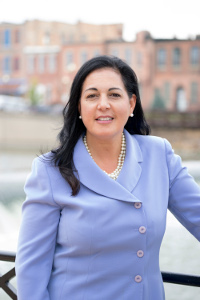 Linda Chapa LaVia is a candidate for Mayor of Aurora, Illinois’ second largest city.
She was born and raised in Aurora, graduating from East Aurora High School. She became the first in her family to graduate college, beginning at community college then earning her bachelor’s degree from the University of Illinois at Chicago. While at UIC, she was an ROTC cadet preparing to become an Army officer.

Linda was commissioned as a First Lieutenant in the United States Army, where she served for five years. She retired as a Second Lieutenant and remained in the National Guard for an additional five years.

As her family grew, Linda and her husband owned and operated multiple small businesses. She understands the challenges of being an entrepreneur and a working mom. In 2001, she decided that politicians should listen to and look like the people they represent, and ran for office.

As a leader in the statehouse, Linda has worked on issues that help families right here in our community and fought hard on behalf of consumers, students and teachers, and our veterans. She has chaired multiple committees, including Elementary Education, Veterans Affairs, and Energy.

Linda has dedicated her life to making life better for middle class families and serving as an advocate for the entire community. She recognizes the opportunities her community, her state, and her country provided to her, and she wants to make sure that those opportunities exist for everyone else.

As mayor, Linda plans to address a series of serious issues facing the city of Aurora. She wants to get tough on Gangs and Violence by working with local law enforcement officials and the park district to find innovative ways to keep kids off the streets and out of trouble. She wants to continue to lead by supporting Aurora schools. Part of keeping kids out of trouble starts with making sure we have the best possible schools at every level, starting with early learning. And she will work to create jobs. She’ll work with local small and big businesses to support growth and opportunity. I want to grow our local businesses and attract new business to Aurora to expand the city’s tax base.